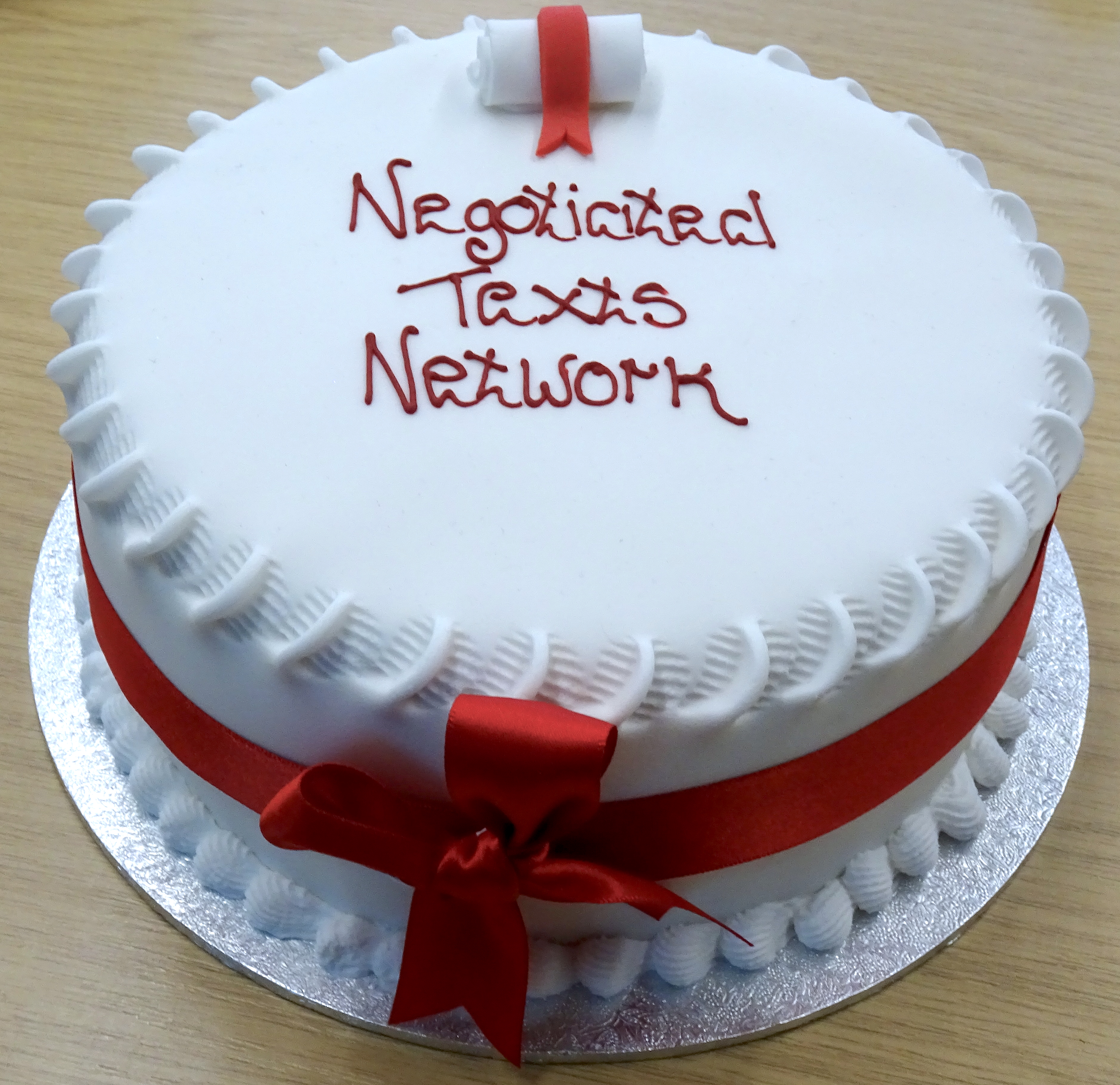 On International Women’s Day 2017, The Quill Project hosted the launch of The Oxford Research Centre in Humanities’ (TORCH) Negotiated Texts Network in Pembroke College. The event brought together students and researchers from across the University to enjoy talks on textual negotiations, and, importantly, a selection of fine cakes! The stimulating talks given by Dr Rob Johnson, Dr Ben Noble, Pip Willcox, and Quill researcher Grace Mallon, prompted discussions about new directions for the study of historical negotiations of treaties, constitutions, and other texts, which reinforced the multitude of new and exciting research opportunities that inter-disciplinary collaboration affords.

Just as the Quill platform presents textual creation as a collaborative process, so the study of negotiated texts is greatly enhanced by a collaborative research approach. Some of the most critical and foundational documents of the modern world have been created by a formal process of negotiation rather than individual authors, a process usually involving a quasi-Parliamentary procedure of committees and sub-committees, often over extended periods of time. Examples include constitutions, treaties or ordinary legislation, together with documents such as the U.N. Declaration on Human Rights, or the foundational treaties of the European Union. The records of these negotiations can be extremely challenging to read as amendment after amendment adjusts the document under discussion in ways that were obvious to participants, but which are difficult for readers to visualize, and negotiations stretch over months or years. Bringing together researchers working on the records of formal negotiations, especially those using digital and statistical methodologies for research, or those seeking to use digital platforms for teaching and public engagement, to overcome these challenges is therefore particularly important. Consequently, our Negotiated Texts Network aims to promote collaboration between projects and departments, and the integration of datasets across platforms for a seamless user experience. It aims to refine and develop an understanding of the existing tools available for the study of negotiated texts; investigate new ways to extend and integrate those tools; and explore new ways to present this category of material to a non-expert audience.

Dr Nicholas Cole started off proceedings by outlining the above obstacles and the difficulties they pose for researchers, the advantages and aims of the Quill Platform in this respect, and, more broadly, his vision for future projects of the Negotiated Texts Network and the research possibilities afforded by creating a platform capable of capturing and digitally rendering the full complexity of texts, and offering a framework for linked open data. The sheer scope of these possibilities offered by Quill’s bespoke software was reflected in the varied subject matter of the talks given throughout the day, from Dr Robert Johnson, Director of the Changing Character of War Centre, presenting on the study of peace treaties of the First World War, and Dr Ben Noble discussing the negotiation of authoritarian legislature in the Russian Duma in the first two sessions, to Pip Willcox, Head of the Centre for Digital Scholarship, discussing the editing process behind modern interpretations of literary texts such as Chaucer’s Canterbury Tales, and finally, Quill Researcher, Grace Mallon, introducing our new project on the drafting of the UN Universal Declaration of Human Rights in the final sessions. Indeed, guests were left in no doubt of the potential for new scholarship in the field of digital humanities, and of the growing potential for exploring texts in previously unimaginable depth.

This was neatly captured by Dr Johnson’s presentation on peace treaties of the Great War. He surmised that, while fascinating, a comprehensive study of these treaties requires such vast knowledge and manipulation of geographical and textual data, not to mention a grasp of some 12 languages or so, that they have, up till now, been almost impossible. As a result, their potential to shed light on modern day conflict and tensions, and, perhaps, offer solutions to them, has never been fully exploited. However, advances in data capture and analysis have opened up this area of research, with new methods of collaborating, coordinating and disseminating complex data. Dr Ben Noble’s discussion of legislative process in the Russian Duma, and formal negotiations within its authoritarian structure, reiterated the potential for cutting edge research using digital analysis. Like Johnson, he communicated the importance of looking to finer, and often over looked details, in informing our view of the bigger picture. In Johnson’s case, he showed that these can be used to discredit modern jihadist propaganda and as evidence for defusing subjects of particular tension in the modern world, while Noble demonstrated how they can provide insight into the hidden processes behind ‘authoritarian’ Russian legislature, e.g. to reveal amendments in which rejected bills have been transposed from entirely separate works of legislature, and, more broadly, to give a general overview of Russian political hierarchies and functions.

The afternoon’s speeches took discussions in a new direction. Pip Willcox’s lively discussion of negotiating literary texts from an editorial perspective certainly gave the audience food for thought. Using the Canterbury Tales as her example, she pointed out that no single authorial version of The Tales exists, with 83 variant manuscripts that are inconsistent in terms of both their structure, with tales missing and in different orders, and their content, with tales rewritten with different rhymes or containing errors, and where the absence of standardised spelling causes inconsistencies in orthography, particularly with regional variations. As such, she showed the importance of examining the literary procedure behind a text, particularly when it is the product of a multi-authorial process, arguing that the form of a text as text itself is promotes an understanding of a text’s context, and the implications thereof for the modern reader. In her introduction to Quill’s new project on the drafting of the UN Universal Declaration of Human Rights, Grace Mallon directly addressed this question of a multi-authorial approach to textual analysis, questioning how we assess individual authorship and influence in the context of such documents, and considering whether there was a bid for national ‘ownership’ of the Human rights movement in the West, particularly in the US. Indeed, Réné Cassin was awarded the Nobel Peace Prize for his role in the drafting of the document, yet it was a product of collaborative procedure rather than individual contribution, and other key figures involved in the process tend to be overlooked in today’s context. In the spirit of International Women’s day, Grace discussed the pivotal role that Eleanor Roosevelt played as chair of the commission on Human Rights, before discussing the direction that the project to draft the process of the document’s creation will take.

The learning opportunities discussed at the event seem many and varied, neatly encapsulated by Nicholas Cole in his closing remarks. He remarked that the while the Quill platform is clearly a clever learning tool for students studying the creation of the Constitution, the way it captures and fully renders the complexities of textual creation in an accessible way ultimately makes it invaluable for expert researchers. By presenting a uniquely detailed digital reconstruction of a text’s creation that forces the user to consider information in its full context using a range of innovative tools and perspectives, even the most experienced of individuals will be pushed to question their intuitions on the subject and consider new perspectives. It is precisely this potential for new ways of thinking that drives the Quill Project and the Negotiated Texts Network and makes our work so dynamic. The lively, thoughtful, and varied discussions of the launch event perfectly captured this dynamism, and we ended the day inspired by what can be ultimately be achieved when students, librarians, researchers working on the records of formal negotiations, especially those using digital and statistical methodologies for research, and researchers of entirely different backgrounds are brought together. We look forward to seeing what is brought to the table at our next event on Monday 8th May 2017.